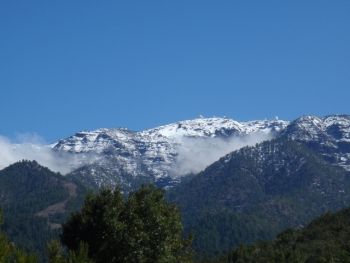 This nice Finca is located in on of the most beautiful area of the island, I strongly encourage anyone to visit the northern part of the island and combine that with a stay at this place.
Marilene

La Isla Verde (the Green Island) has 19 nature reserves (35% of the surface) of which National Park Caldera de Taburiente is the most famous. The highest peak, El Roque de los Muchachos (2426 meters) is spectacular. The northern part of the island is known for its beautiful forests and deep gorges, the southern part for the volcanic landscapes and salt pans. On the island there are plant species that are unique in the world. Not without reason La Palma is called Isla Bonita (the beautiful island) or Isla de las Estrellas, Island of the Stars. The clear night skies are filled with countless stars. For that reason alone astronomers from around the world come to La Palma to study space on Rocco the Muchachos.

La Palma is an excellent year-round holiday destination. During the summer the weather is nice and it rarely rains. During the winter months, weather is appealing for walking. January is called "little summer", with summer-like temperatures, especially on the west side. The nights can be chilly. The ridge running across the island causes different climate zones. Each gorge and each altitude has its own climate. It is said that there are 75 microclimates on the island. The sun is always shining somewhere on the island.

Is a simple cuisine. In local meat dishes often rabbit, goat, pork or lamb is used. Local species of fish are grouper, parrot fish, sole, tuna and conger.
Specialty on La Palma is "Papas arrugadas", small potatoes which are cooked in their skins in salted water. They are served with a sharp red Canary sauce, Mojo Rojo or the milder green sauce, Mojo Verde.

La Palma has a number of fine wines. Each region has its own wines. Famous are the Malvasia, sweet dessert wine and the Vin de Tea, wine aged in barrels of pine wood, giving the wine a special flavour. The Ron de Miel, honey rum, is a liqueur that is worth trying.

The offer of leisure activities is as varied as the landscape: hiking, diving, mountain biking, horseback riding, paragliding, making ocean drums, soapstone workshops, massages, painting, drawing, walking with donkeys, tours to the lava, yoga; on La Palma, anything is possible.